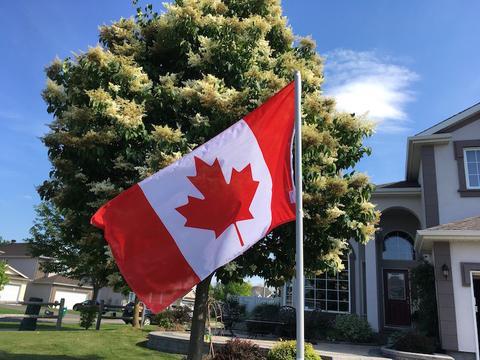 This Canada Day is definitely not like the Canada 150 celebration 3 years ago. Many things have changed on a global level like the Coronavirus pandemic. And, many things have changed on a personal level in my family life. I decided to bring back this old blog post as a way to celebrate this great country we’re so fortunate to live in. I also decided to leave it as originally written because that’s the way it was back then.

July 1, 2017 was Canada’s 150th birthday. There’s been much hype leading up to this milestone, after all you only turn 150 once. Plus, we live in our nation’s capital so we’ve been hearing about, and seeing the preparations for, the big day all year long. We even have a Canadian flag proudly displayed on our lawn. So, it’s no surprise that my daughter asked me if we could go downtown to Parliament Hill to celebrate this year. At the time, being a month away, I said “Of course, you should experience Canada Day on Parliament Hill at least once”.

But, as the day drew upon us, there were many excuses ‘why’ perhaps it wasn’t such a good idea to venture downtown. We’d just arrived home the evening before from being away for a week and I was tired from the drive. The weather was not cooperating. It was raining most of the day and the forecast called for thunderstorms in the evening. There’d be a lot of people downtown and parking would be difficult. There were reports of standing in the security lineup for hours on end. And, security forces were on high alert given the recent terrorist attacks in London and other parts of the world.

But…my daughter called me on it. Early in the morning, she asked if we were going to the Hill. I was non-committal. “Let’s see how the weather pans out”, I said. Later in the day, she reminded me how I’d said a month ago that we ‘d go downtown to celebrate. Now, I was not living up to my promise. I conveniently used the weather to defend my inaction. I told her we’d go to the small village of Osgoode to watch the fireworks, something we’ve done in the past. It’s closer, easier to park, and a lot less people. She accepted the consolation prize but was not thrilled by it.

So, when we got home from walking our dog, I said to my husband, “What do you think about going down to Parliament Hill tonight to watch the fireworks?” Much to my surprise, he said “Sure why not, I guess we should give Maddi the experience”. Damn, I thought he would say let’s just go to Osgoode.

We packed up our plastic rain ponchos in a backpack and headed out. On the drive downtown, the skies opened up with a torrential downpour. We saw the car ahead of us pull a U-turn. We joked, “Yep, they’re heading back home”. We continued on and as we got closer to downtown, the rain let up.

It was still raining but not the ‘soak you to the bone’ kind of rain. We headed up Bronson Avenue knowing we could only get as far as Laurier due to the road closures. The traffic was light, a good sign perhaps for parking but maybe not so much weather-wise. We turned onto Laurier and wham, a long line of cars crawling along at a snail’s pace. We turned down the first street heading away from downtown. Then just as we made our way onto a side street, a car was pulling out from a parking spot…perfect. We pulled in and started our hike up Bank Street towards Parliament Hill. 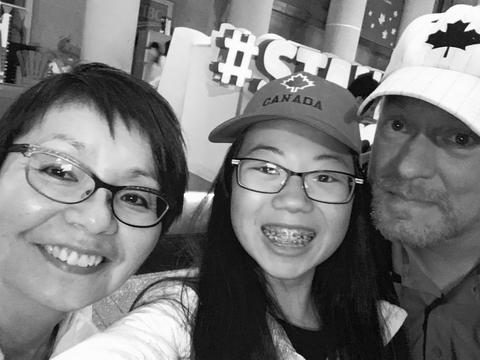 We came to a few exit points along the way, with no lineups, hoping to go in the out door. However, we were instructed by the law enforcement officers, many carrying assault rifles in their hands, to head East to the public entrance on Elgin Street. We had cautioned Maddi earlier to stay close to us, that there would be a lot of people, lots of security. That she would probably see people who’ve had too much to drink. We didn’t want to scare her. We just wanted her to be alert and stay close.

When we reached Elgin Street, we saw the huge lineup snaking its way around the barricades extending from Sparks Street down to Laurier Avenue. We considered watching the fireworks from some vantage point on the outside but we knew the view would not be as good. So, we found the start of the lineup and entered the queue. And surprisingly, it moved quickly. As we shuffled along, I said to my husband, “You gotta love being Canadian”. The lineup was orderly, no pushing or shoving, just moving along with animated conversation all around us. Ironically, the only disorderly conduct we witnessed all evening was two little old ladies behind us in the line exchanging angry words, a few shoves back and forth, and giving each other the finger. It was rather comical.

Fifty minutes later, we were in the security tent which operated much like the security at the airport. We took off our jackets, pulled everything out of our pockets, had our backpack searched, and then went through the metal detector, the wand type. And just like that, we were in. The first thing we saw was Gordon Lightfoot singing on the jumbo screen. We quickly made our way to the Hill. By this point, the rain had subsided and didn’t return for the rest of the evening. Yep, no need for the rain ponchos after all!

At first, we hung back on the edge of the crowd. But with Maddi’s urging, we snaked our way closer to the stage. It was exhilarating…being part of this sea of people, singing and dancing to the music, cheering and celebrating with fellow Canadians of all ages, gender, race, culture, and religion. Peacefully and joyfully celebrating our land of the strong and free. I was so happy we came. And the fireworks were spectacular. Not because of the fireworks in and of themselves, though they were big, beautiful, and plentiful. We have seen just as beautiful fireworks at smaller venues like Osgoode. But, because we were part of this crowd of many thousands of people, oohing and ahhing, and experiencing it together. 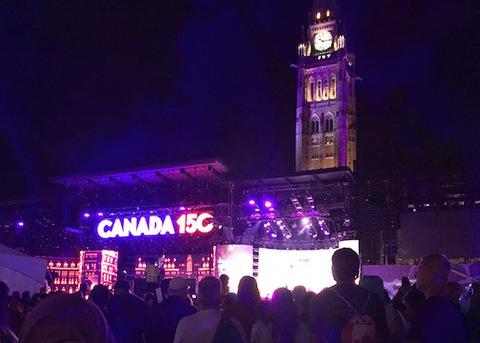 I’m so happy we gave Maddi this experience, this happy memory. At one point, Maddi and I were walking up the street arm in arm. I savour that moment because it doesn’t come often these days. I know they’ll be fewer and farther between as she enters her teenage years.

In the long lineup, we talked about how I was just a little girl for the Centennial celebration. I remember a little bit about it but not much. Maddi will also have the privilege of seeing two 50 year birthday celebrations. She will be 63 years old for the Bicentennial celebration. I told her she’ll be there with her grandchildren. And she said, “And you’ll be there with your great grandchildren”. I said, “Hmm…I probably won’t be around then”. And she responded, “Well, you’ll be there in spirit. You’ll be looking down and watching us”. That thought warms my heart!

We headed back home and all agreed it was totally worth coming downtown. On the way, we also gave Maddi the late-night munchies experience. We went through the A&W drive-through. Not the healthiest of options but all part of the fun. 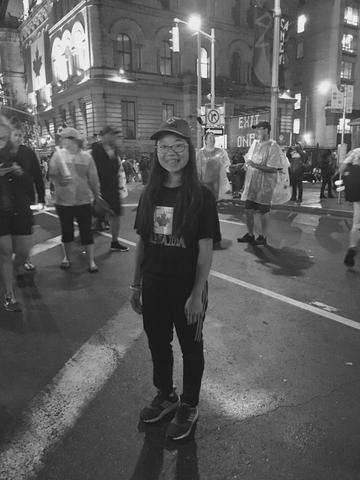 So, is there a lesson to be learned from all of this? The three of us…me, my husband, and my daughter…are all introverts to some degree or another. It would’ve been so easy to use the weather, the crowds, and whatever else as an excuse to go to a smaller and closer venue. Or even better yet, to stay home where it was warm, safe, and dry and watch the festivities on TV. Would it’ve been the same experience? Of course not. And truth be told, my daughter would’ve quickly lost interest in watching it on TV. We would’ve been grumbling at her to get off her phone. It’s not the same as being there, feeling the energy of the crowd and getting swept up in the live performances, hearing the pop of the fireworks and seeing the magnificent bursts of colour.

So, the first lesson: It’s good to get out of your comfort zone. Go out, take risks big and small, and experience new and different things. It’ll make you a more well-rounded person. And two: And this one is especially for me…commit and follow through. Not only on the important, work-related things which I’ve always done, but the smaller, seemingly inconsequential but no less important, personal ones. It’ll make you a better role model not only for those you love, but for yourself too!