The School of Rock is winding down 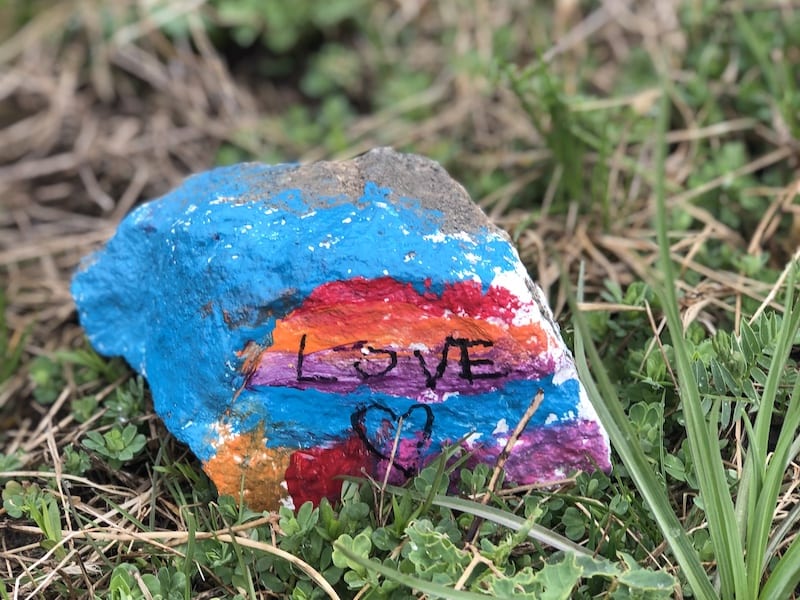 What’s the School of Rock?

It’s been almost 4 months now and the School of Rock is winding down. You might be wondering what’s the School or Rock?  And, why is it coming to a close? Isn’t that the movie with Jack Black?

And, you’d be right. That’s definitely where the name comes from. But, this School of Rock refers to the painted rock photos I’ve been posting on Facebook with befitting quotes. 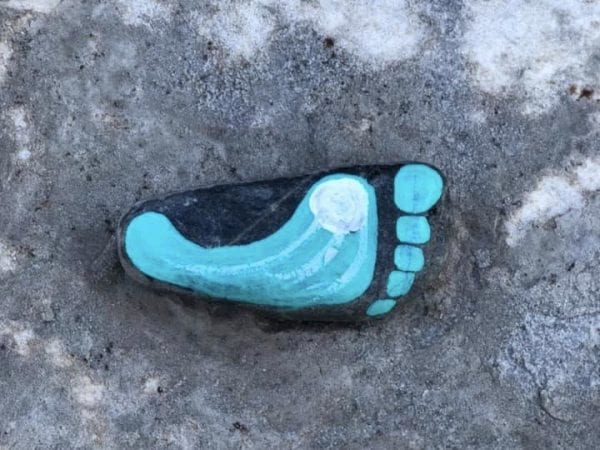 “May your feet take you where your heart wants to go.” ~ Unknown

It all started about 6 weeks into quarantine when the snow finally melted here in Ottawa and people slowly started venturing outdoors. Painted rocks started popping up in neighbourhoods. I believe it was mainly in the suburbs where families were trying to keep busy with different indoor activities other than watching a screen.

A friend posted a few on Facebook so I was on the lookout when taking our dog for a walk. When I found my first one along the path up the hill, I was so excited. It was like finding a treasure. It lifted my spirits. I took a photo and posted my first rock photo on April 24th.

How it became a thing

From that day onward, more and more rocks sprouted up in our neighbourhood and neighbourhoods around the city. Not just in Ottawa, but as far away as Calgary, and likely further. It became a thing. It provided inspiration and hope, and a creative outlet for kids and adults alike. 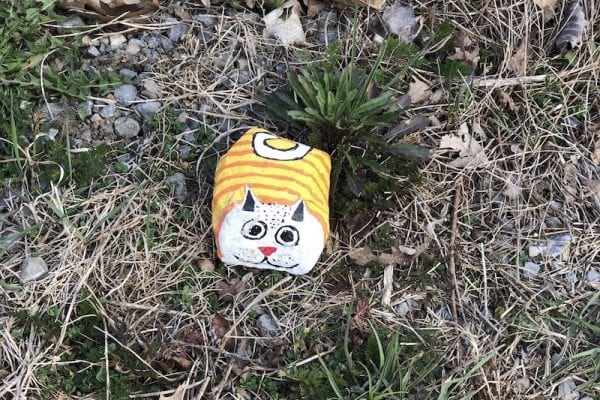 “Cats have it all – admiration, an endless sleep, and company only when they want it.” ~ Rod McKuen

As time went on, the rocks become more intricate and elaborate. I looked forward to our walks every day to see what new ones had sprung up overnight. I loved them all. The artistic and skillfully painted ones and the ones painted by young children. I took photos of every one.

How it become part of the coffee shop

I started posting them each day in the COKANNA Virtual Coffee Shop group and adding inspirational, sometimes funny, quotes. Whatever seemed to go with the image or wording painted on the rock. It wasn’t planned. I had no agenda. I simply wanted to share these creative works of art. And, it grew from there.

Other group members started sending me photos of rocks they’d found on their walks. I liked the challenge of looking for just the right quote. It was a fun and welcome distraction amid the stressful trips to the grocery store, disinfecting everything, and worrying about my business. 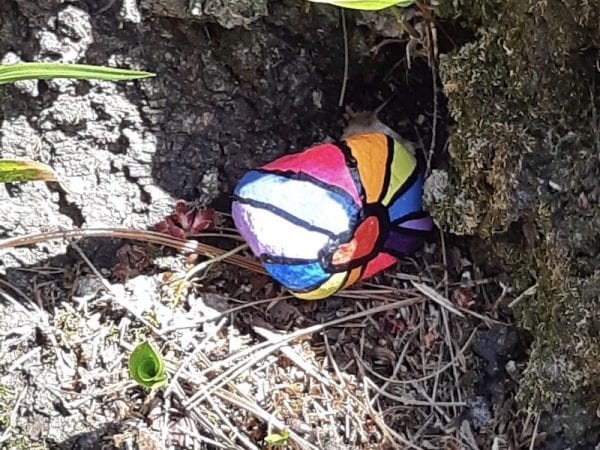 “People are like stained-glass windows. They sparkle and shine when the sun is out, but when the darkness sets in, their true beauty is revealed only if there is a light from within.” ~ Elisabeth Kübler-Ross

People started providing photos of ones they thought would be a challenge with a message, “Can’t wait to see what you come up with”. Then people would comment, “Wow, you’re good” or “That’s the perfect quote” or “That’s not where I expected that to go”.

A few people started painting their own rocks and spreading the good cheer. There were rock etiquette queries. Is it okay to pick up a rock you like and take it home? Some thought it was okay if you left one in its place. In my own travels, I found sometimes the rocks moved around and sometimes they disappeared altogether. I always pictured in my mind a little child finding it, a treasure, and carefully carrying it home. Or, maybe a person who was struggling saw the word “hope” and took it home as a source of comfort. 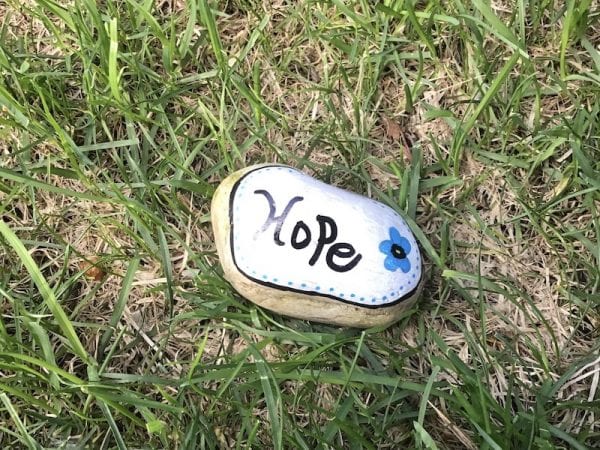 “Let your hopes, not your hurts, shape your future.” ~ Robert H. Schuller

From April 29th to today, August 14th, I have posted a different rock photo and quote each day under the heading Today’s School of Rock. That’s 107 School of Rocks. It’s been a good run. I couldn’t have done it without the help of several rock photo contributors: Jeff Gilchrist, Jen Murakami, Christine Klerian, Danette Serr, Carolyn Hann, and Helena Guzmán. I hope I didn’t leave anyone out. If I did, I apologize. 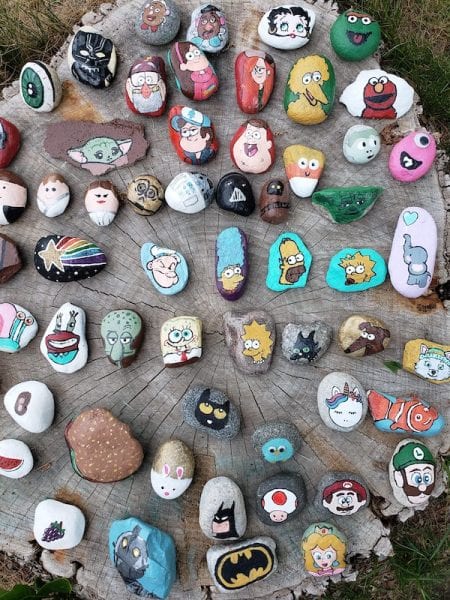 The School of Rock is winding down. As we moved into the first phase of re-opening, no new rocks appeared. People were going back to work and getting busy. No time to paint rocks. And now, the rocks have all but disappeared. Even the ones that had been there from the beginning. It’s makes me a little sad but at the same time, I think it’s time. It’s time to move on. I think I may have enough photos to get to the end of the month. If you happen to have any, send them along to colleen@cokanna.ca and I’ll do my best to find the perfect quote.

One group member came up with the idea of printing out all the photos and quotes and putting together a book of some sort and selling it with the proceeds going to a charity like the Food Bank. Brilliant idea! I checked it out with a friend in publishing and there were a few things that would make this difficult, not impossible, but things that could come back to haunt me.

I would need to get written permission to re-print the quotes in a book. While for some quotes, it might not be too hard to track down the author and get permission, others were written by people long passed away, or unknown. For others, it would probably be impossible like the ones attributed to cartoon, movie, or Disney characters. It could turn into quite the exercise and probably require some financial outlay. Definitely, not the business I’m in.

And, another even more grey area would be the rocks themselves. Would I need to get permission to capture someone’s art work, even if it’s on the ground for everyone to enjoy, in a book?

Retrospective of the times

So, as the School of Rock winds down, it’s captured in a virtual coffee shop group on Facebook. In years to come, it will be fun to go back and look at it as a retrospective of the times. 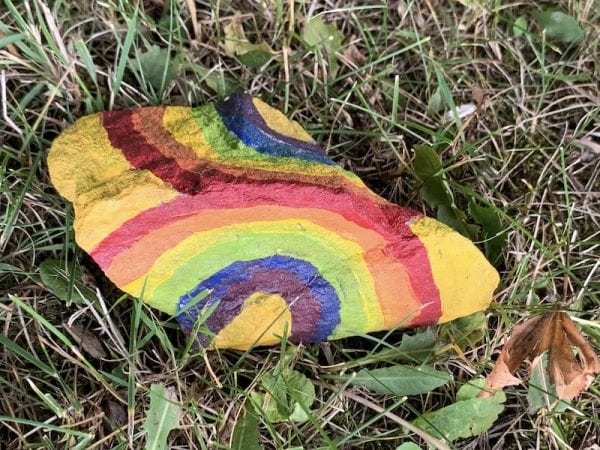 “Diversity is being invited to the party; Inclusion is being asked to dance.” ~ Verna Myers

Hmmm, maybe I should at least download them into a word document and save it on my computer. In the meantime, if you’d like to check out the rest of the School of Rock photos, request to join the COKANNA Virtual Coffee Shop.